The following is from the British Columbia Council of International Cooperation’s website. To go their site to see this and other articles click here. 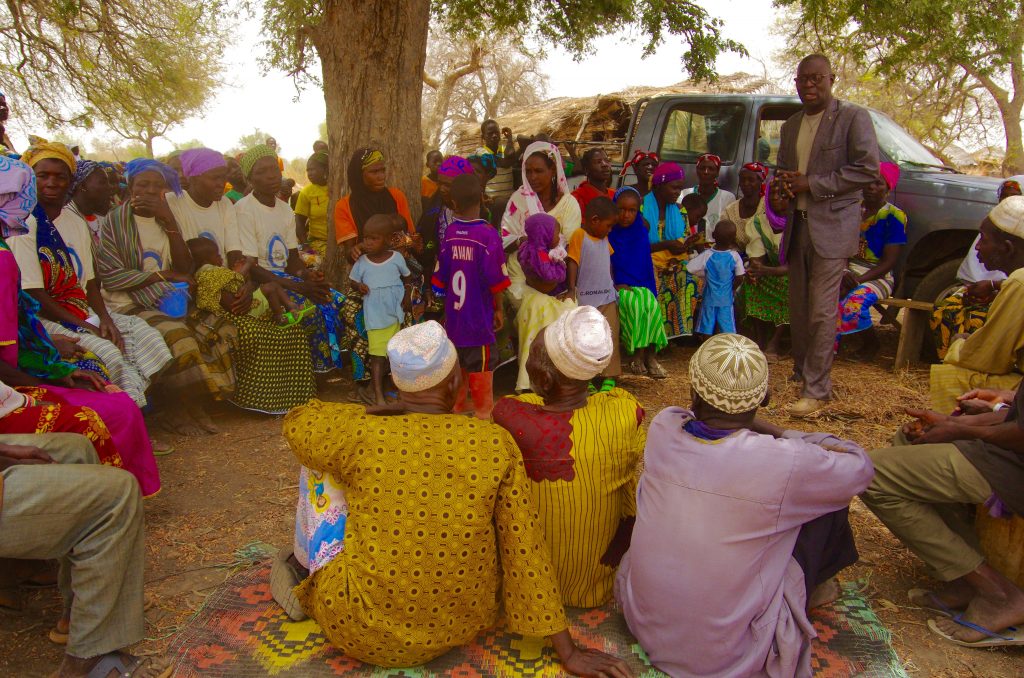 Written by Diane Connors, BC Council for Global Cooperation

Charles Tankoano had come a long way when he walked out of the chill Vancouver air and into the BCCIC office. “He hasn’t taken off his jacket since his arrival,” Judy Gray chuckled as the small group settled into their chairs. Charles had arrived from Burkina Faso, a small country in West Africa, earlier in the week. His visit to British Columbia was a whirlwind of presentations with schools, community groups, and donors of World Neighbours Canada, which, thanks to funding from Global Affairs Canada, is the partner organization that brought him over and supports his work in Burkina Faso.

Charles spoke only French, requiring Judy to translate for those who did not know the language. The group, consisting of Charles and 3 members of World Neighbours Canada, had come to BCCIC to use the teleconference system to hold a call with their project manager from Global Affairs Canada and a GAC International Development officer who will be travelling to Burkina Faso in the near future. As the call started up and the inevitable technical issues were mitigated, a photo slideshow appeared on the screen while Charles explained the work being done in 18 rural villages. The images showed children receiving medical care, people eating together, and people working with the flat, dry land in the Fada region of the eastern part of the country. This call was a valuable connection – giving voice to Charles to share the challenges and successes of community development, and strengthening the relationship between Global Affairs and a small Canadian development organization that receives project funding.

After the conference, we sat and talked a while about the organization Charles leads, called Association d’Appui à la Promotion du Développement durable des Communautés, or APDC for short. Charles explained that the organization began in 2002, with the vision of promoting sustainable and equitable development in poor and marginalized communities in Eastern Burkina Faso through capacity building of individuals and villages. The areas of focus for the projects include: food security, community health, female leadership and gender issues, environmental protection, drinking water supply, and adult literacy. Drinking water and adult literacy are addressed by APDC despite not having funding for these projects, as they realize that these two areas are critical to long term improvements.

As Charles spoke it was clear that the areas of focus were all linked – working in one area will often strengthen another. APDC’s gender work is particularly compelling, and some of the earliest initiatives addressed the connection between women and the land. At the village level, APDC promoted the idea that women have the right to work a parcel of land, and have access to that plot year after year, so that she might improve the soil and benefit from the productivity. This was done in line with the national government making policy changes and providing women access to land. APDC also reinforced the notion that when men and women work together, their lives and their children’s lives are better. This is mostly achieved through information sessions with men, giving examples and working through questions that reveal truths and inequalities. Through this work the men gradually come to new understandings such as the fact that women should not be doing hard labour when they are in late stages of pregnancy, and that household work should be shared between a husband and wife. Cultural changes like these are APDC’s goal, but there is still much work to be done in this area for these ideas to be accepted by the majority of villagers. 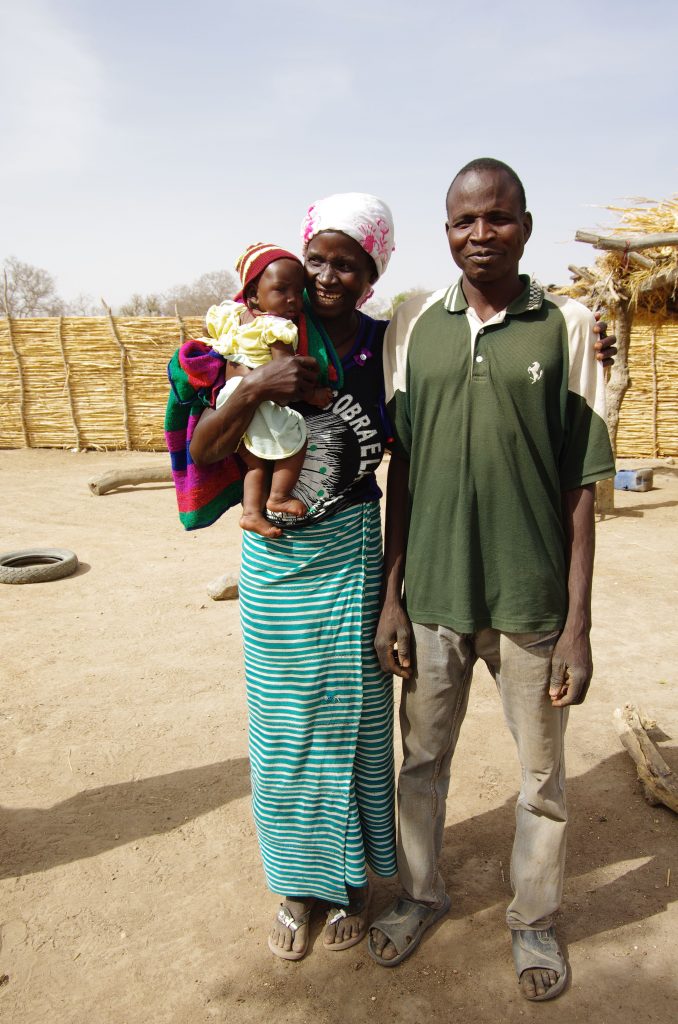 “I managed to get this great picture,” Judy said as she turned her laptop, showing a photo of a man and woman, side by side with the woman’s arm around her husband’s side. “Charles explained that 10 years ago, public demonstration of any kind of affection would not be visible or accepted. It’s a sign of progress.” Part of this progress has been enabled directly through Global Affairs Canada funding, as a Gender Consultant (local Burkinese professional) has been hired to evaluate APDC’s current gender initiatives and provide suggestions for enhancing this work. The resulting recommendations have been incorporated into project programming where possible. The improvement in gender equality often filters into benefits in other areas: improved supports for pregnant women, improved nutrition for children and pregnant women, improved environmental practices and improvements in health care. It also helps to develop a sense of community, which is an underlying foundational goal of APDC projects.

Charles explained that he gained experience in development work through a few different paths. He started out studying agriculture and agronomy in the nearby countries of Ivory Coast and Niger, and he began working with the Burkina Faso government, teaching farmers how to improve soil conservation. Over time he began to find the bureaucracy of the government frustrating, and wanted more freedom to work directly on strengthening community capacity. He worked for several NGOs; in particular an NGO in Senegal, where he solidified his understanding of a participatory philosophy in development. Then, he formed his own organization to address the needs of people in his home country of Burkina Faso. When asked why he pursued such challenging work he simply explained that he had a desire to work with people who are marginalized, taking into account their own culture and respecting their values.

When looking at the communities in the context of the future, the topic of climate change came up. One of the reasons for the impoverishment of the region is that the land is difficult to make productive due to less and less rain falling every year. Charles explained that though the people are mostly illiterate and uneducated, they don’t need to be told what climate change is. Living near the desert, it is already obvious that climate change has arrived: now there is only 3 months of rain per year on average, versus the 6 months of rain that could be expected in the past. The progression of climate change requires more tools for communities in these hard hit areas to be able to mitigate the effects of a warmer world – Charles explained that “the people of Eastern Burkina Faso are forgotten by the government and are being left further and further behind. More resources will be needed to mitigate the effects of climate change.” APDC is doing its best to address these challenges with simple but effective techniques, such as getting the right seeds to withstand dry conditions, creating and using compost, keeping trees to prevent erosion, and building “stone ribbons” along the fields to allow the water to soak into the soil more. These measures have already helped people to increase yields by as much as 50%.

Though the challenges are still great, and change is slow, Charles has seen significant improvements for people in the region over the years. With the help of APDC, people have learned to vary production with diverse activities and better techniques, which has improved nutrition, community resilience, and environmental stewardship. More children are getting vaccinated, and women’s health is improving, especially as attitudes toward family planning shift. The improved relationship between men and women has resulted in building up the confidence of women, which is visible when women speak at meetings and there is an expectation that they will be listened to. These things together create a more hopeful picture for Burkina Faso, though it is one of the lowest listed countries on the UN Human Development Index. Charles explains that he is always in a state of self reflection, asking whether he is doing the right things, and providing the right support. He says the next project is to look at new strategies and solutions for Burkina Faso in a changing world, to push further and go the next step.

World Neighbours Canada is a member of the BC Council for Global Cooperation, which is a network of global development organizations based in British Columbia, working toward sustainable development both at home and around the world.