Editor’s note: The following comes from a mid-term evaluation of our Infant-Maternal Health Project in Honduras. I was struck by the chapter that contextualized the situation in Honduras presently and thought it worthwhile to share with our members. This has been Google translated from Spanish so please keep that in mind. 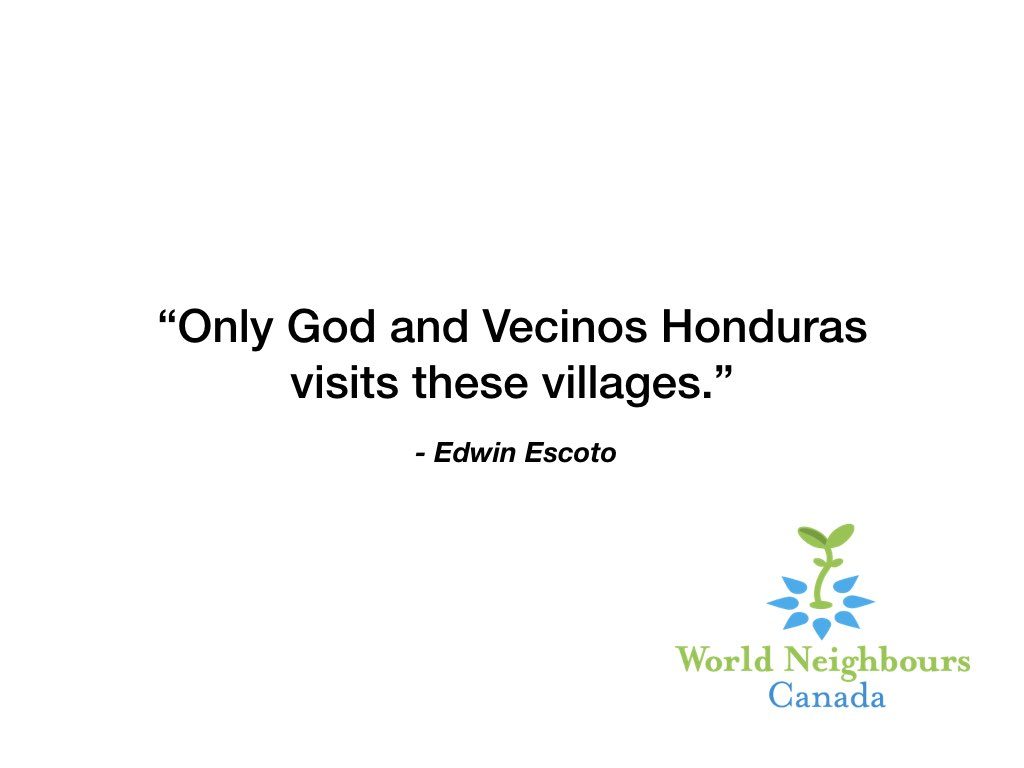 The work of Vecinos Honduras (VH) is in rural zones of Honduras, in poor populations, marginal and excluded, who have to settle in remote hill areas, because they do not have another option to keep their families; who had to build with tenacity and sacrifice a social coexisting system with many limitations: they do not have public services, lack worthy income; high deterioration of the natural resources, low production and productivity; suffer contamination due to agro-chemicals and garbage; bad infrastructure.  The majority of the families do not have potable water; more or less half of them lack electricity, and in the majority of the cases the houses need to be improved.

This scenario of shortages contributes to the precarious life conditions of the population.  They basically depend of subsistence agriculture, mainly for consumption. The only factors that contribute to local economy and alleviate a little the crisis of family subsistence, are the remittances in the south and coffee in the eastern part of the country.

There is a very deficient education service: pre-school and elementary school with many limitations, and a poor public health service oriented to curing illnesses.

In research made by the World Health Organization to measure the performance, quality and coverage of the health services, Honduras occupies the 131 place of 191 countries.

The greatest potential for development in Honduras is agriculture.  However, investing in this sector implicates a very high risk with respect to the return of capital.  It is for this reason that neither the private companies, nor the financial system or the government support this sector, which could easily generate one million jobs at the national level (study from ANAFAE).

Support is oriented towards large enterprises and crops for exporting such as: Coffee, Bananas, Cantaloupe, Seafood and Tilapia, among others.  The families, who live on the hills in a subsistence limbo, in which institutions with a sustainable development approach, such as Vecinos Honduras, play a very important role in their lives are in many ways lucky because, these type of development institutions are few, and those who would assume challenges in this context, are even less.

According to estimates from the government, for each ten Hondurans seven are poor, and of these seven almost five live in extreme poverty.  This has been this way for at least 100 years; which puts in evidence the erratic public policies applied, which base their dysfunctional neoliberal approaches that had and still have the economy of some developed countries in crisis; the last ones Spain, Greece and currently Argentina.

Neoliberalism does not even work for great powers who have been their promoters; and now USA embraces protectionism, that has generated a commercial war between the USA and the rest of the world, mainly with China and Russia.  Moreover, Honduras continues betting on the recipes of the IMF, when it has been proven that these only seek the mobility of resources to the great powers.

Honduras is known in the world as the country of extreme: the most violent, the most corrupt, the poorest, the most inequitable and more recently, the one with more massive immigrations to the USA.  Complete unemployment and sub-employment has a direct relation with poverty, is because the people do not have access to economic income and are poor.  The development plans of the public sector are subject to national and foreign investment, which never arrives.  The problem is that the families have to eat today, they cannot continue waiting until investment arrives, and in the meantime, how do they feed their families?

Because of the political instability characterized by disrespect to the judicial framework, disrespect of popular will, election frauds, corruption and impunity, as well as fiscal insecurity as the rules change as it is appropriate to the politician in turn, investors don’t know what to expect and prefer to invest their capitals in other countries.

The debt of Honduras is 12 billion Canadian dollars (SEFIM). The Gross Domestic Product (PIB), is approximately 22 billion dollars.  The general budget of the republic is 11 billion dollars for the year 2018 (less than the debt), of this budget, and each year 2 billion dollars are used to pay the debt (capital plus interests).  In the last 6 years, 9 billion dollars has been paid; and the worst part is that Hondurans do not know why we have this debt; how it is used; and if there is evidence of it reaching the country.

“The Honduran health system is deficient in: Doctors, nurses, equipment, supplies, medicines, health centers, beds and budget.  It also suffers from corruption and lack of social sensibility from the staff; therefore, it is considered to be in crisis.  All of the above is summarized in that the State provides the Hondurans a health service which is of a very bad quality.  The greater impact is suffered by the poor, and among these, we find the families who live on hills of the rural areas. “

However, what we do see is that because of its payment, investment is reduced in social aspects such as: health, education, housing, community rural infrastructure, etc.  Instead of increasing the health and education budgets, increases go to the police and the army for weapons, equipment and war practices, in a country in which one third of the population is considered homeless. If this spending negatively impacts the living conditions of the urban populations, where there is more employment and more is invested in infrastructure; it affects the rural populations where there is no employment and investment is minimum even more. It is in this context, and with these families, that Vecinos Honduras works.